Racism is funny (not really) 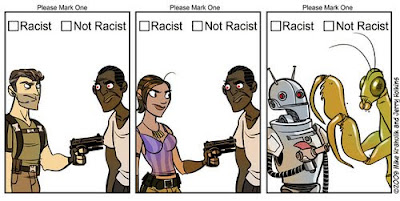 You know what I find funny - racism.

NO racism in itself isn't funny AT ALL. But, rather, the perception some people have. I was attacked (gently) last night via email from someone concerning my project. What I found funny (like car crash funny) is the fact that this person chose to "judge" me without meeting me, or (imo) worse! without asking for further explanation.

Yet, this is ok. It is ok to judge me before meeting me because I am white.
Maybe this is reverse - racism??? (If we are using this persons argument)

I know - tread lightly - this is a touchy subject. (I get that)

Why is it racist for me to judge someone who is say Spanish American, when my judging has nothing to do with their race (yet it gets called racism). When in turn this person can turn around and judge me? (yet it would never be called racism) Some of these people who are on this particular soap box are the worst offenders.

Now, this person was not African American. But, they are not Caucasian either. Let me just say that I did not back down, and I did call this person out on their quick judging of me, which to me seemed to me to go against what they stood for.

But, damnit I was mad!!!! So, without too many details, now you know!

p.s. noone was harmed with this post, let's keep it that way in the comment box
Posted by Just Jules at 7:48 AM

Ahh yes, you put an opinion or statement out there, it's going to ruffle someone's feathers. Keep up the good work my friend...it's all about the motivation, where the heart is...that's what matters.

Oh yeah Big Pappi is gonna have to get him some of this......

It sucks. But it is the world we live in.

Anyway... I agree, it sucks, but you did good by showing that person they were being hypocritical... enlighten one person at a time! :)

I'm still stuck on reverse racism... is it racism or is it msicar? racism is racism no matter what color you are.

ps- just so you know one of these days I'm planning on forming the naawp. seriously.

I don't really believe in love but I might have just fallen in it!!!!!