Recovering from my third virus of the Fall season I am having a hard time getting my brain to kick in. What I decided to do was grab the dictionary next to the desk (which I have used a more now that I have started blogging than I ever did in school!) anyway.. focus... I grabbed the book and decided to write a blog post on what ever word I came across first. The word I opened to first was memory/memorize so, here I go... my post about the first word in the dictionary I saw.

Memorize - My worst teacher ever was named Mrs. Dolphay. She was my 8th grade English teacher. She looked quite similar to a troll. She ate in her classroom and paid students a quarter to take her tray down in the beginning of her next class. For some odd reason brown rice comes to mind when I think of her. This is something she ate often I believe. She also talked about brushing her teeth. She insisted that we brush our teeth for two minutes each day. Now coming from a troll we all laughed at her behind her back.
(oh to be such a rude jr. higher again- cut my wrists now!)
Everyone knew where she lived (on the other side of the lake) and we knew she drove a big conversion van. It was rumored she had a scrawny little boyfriend which made for some Jack Sprat jokes.

She was old by classification of an 8th grader, and I still believe I would find her old now as an adult. She had a reputation. She was "one of those teachers" . She was tough. As an adult now I would say that she had this reputation because she expected things out of you, you were to learn in her classroom. Something teachers had side stepped in the jr. high I attended. 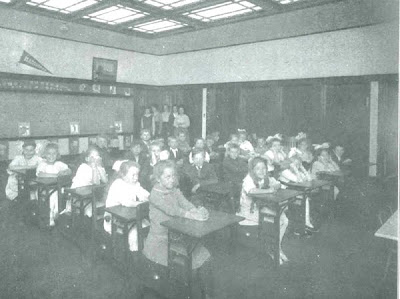 We learned to conjugate sentences, what adjectives, prepositions and the likes of them were, along with examples that we were to memorize. Yep, good old fashion stand in front of the class and recite, rote memorization. Sadly, I remember very little. All I can still do is the beginning of the propositions-
about
above
among
around
along
at
because of
before
behind
below
beneath

and then I lose it..... Still impressive since this was 22+ years ago.

Yes, when I see the word memorize I remember Mrs. Dolphay (who probably was really a Ms.) Many years later I ran across a box in town that was giving prizes to local teachers, all you had to do was nominate your favorite teacher. I remember standing before the box and running through my past teachers like a slide show in my mind. There was my Kindergarten and First grade teachers (everyone loves them), definitely NOT my second grade teacher (she called me blabber mouth in front of the whole class, bad bad teacher) and so forth through the list. I finally landed on Ms. Dolphay - by all means she won my nomination. She had expectations and a love of learning, and although she was tough she was well meaning. As an adult now, I get her. I kind of think I always did.
Posted by Just Jules at 6:43 PM

Labels: memorize, picking words out of the dictionary

But you are a blabber mouth! Just look at you blog! Tee-hee! Interesting memory you shared with us today. I think you must be feverish to be remembering such tortures. Hurry up and be well. Mwaah! Big kiss to seal the deal.

thank you for having a cup of tea over here in our garden in ireland. sorry but at the moment i am enjoying an all american tea: chai from david rio. and i love it! anyway, i have been curious about your blog as i am a regular reader at julochka's but - as my poor regular readers know - our internetline is at stone age speed most of the times so i can't just blog-around-the-clock as i sometimes wish. but we'll meet again and of course i will 'support' your mum as she lives in a blue house like us! eliane

Poor Ms Dolphay. She was soooo talked about by not only students but parents. She lived across the lake but the house had tar paper on the outside held on by laths as long as she lived there. I am glad you have your memory of her. I too think she was a good teacher.

By the way,how come I never knew your teacher called you a blabber mouth? Nancy called you motor-mouth but you were only about 5. I enjoyed your talking. You were home for 4 years with me alone after Mark and Paul went to school and you were a lot of company and I loved talking to you. Hey, maybe that is why you talked a lot, I talked a lot to you. Anyway, that is what we all can do in this world, create memories. After we are gone, and we are all going, that is all people have left of you/us....so make memories every day!

Wasn't there some song about prepositions that was supposed to help us memorize them? I can remember the tune, but sadly, none of the prepositions...

There is a special place for people like Mrs. Dolphay, people who actually choose to put themselves in front of eighth grade kids!

You brought back some memories for me as well. My toughest teacher was 5th grade, Mrs. Laidlaw. She was tough, but I liked her because she was fair. My other favorite was my 3rd grade teacher, Mrs. Baer, but that's because I was teacher's pet!

I HATED my 1st grade teacher! He insisted that I should have a nickname...(didn't like my real one, I guess) and so he called me Tressie. He was a flamer BTW

isn't it funny how some people always stay in our memories forever?

Love the pic! I think I see you hiding behind your hands...How can you be a blabbermouth with your hands covering your face!

Thanks for this blog. Ms. Dolphay (Ms. only becuase she was divorced) was also my teacher, many years after she retired. She was my gradmother and taught me many things; Greek and Norse mythology and the 8 parts of speech which I can still recite by heart. I thank you for your view and being able to peek in a window on her that a 10 year old never never could have seen. I also must agree that it is those who make you work the hardest and challenge yourself that you really appreciate.