Things are a changing around here...

As I was cleaning up the house yesterday I realized that there are several things I take for granted and that annoy me that I will eventually really really miss. There are also several things that I WILL NOT miss. Here are some examples.
Showering with two ferocious dinosaurs and a fishy wash cloth. I will miss that. The day I don't have the suction cup Elmo staring at me in the shower is the day I will be lonely in the shower. Who can say they get to shower with Elmo every day *wink.

This I WILL miss 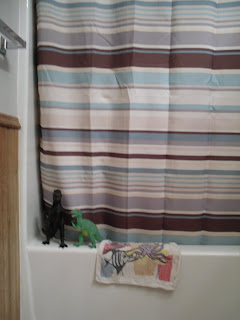 I won't miss the half eaten food and the food messes in general. I am guessing the day will come when I wish there was something left over after three growing boys and a girly get done with a meal - but in the mean time - half eaten food and full blown messes

I will NOT miss. 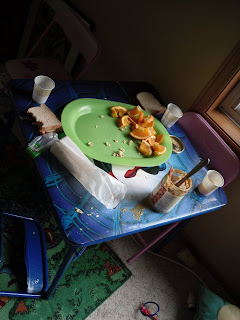 I will miss having Barbie side by side with Light Sabers and Nerf guns. I think I see a rifle in there too! Yes folks it was a shotgun wedding between Barbie and Ken. With grape scented/dark hair with purple highlights Barbie, Snow White Barbie, and the Prince from the Magic Pegasus (the African version) were in attendance. Ken wore tux pants and an odd patterned shirt and Bride Barbie from the Magic Pegasus was wearing a Barbie dress from a vintage (my old Barbie clothes) 80's number with a strap on veil. That is how a Barbie shotgun/lightsaber/nerf gun wedding goes.

I will miss THAT. 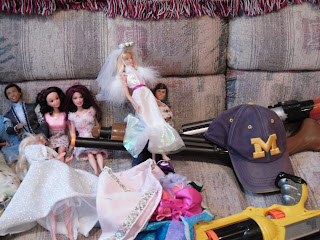 I won't miss the mess that kids can make in a blink of an eye. Forts always sound like such a good idea - set up is quick but messy and play time takes half the time as setting up the fort - guaranteed. Lincoln Logs can only be played with if all the contents of the bucket are dumped out. This entertainment lasts less then the fort building/playing yet causes far more injuries to mother's toes.

This I WON"T miss. 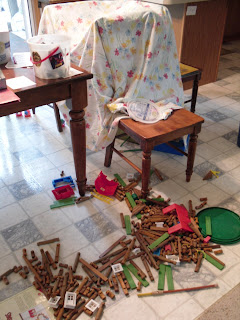 Things are quickly changing around here. We are being thrown into an area of parenting I have been dreading - no parent can ever truly be prepared for the growing pains and attitude that we are starting to see (already).

But some things are far easier - like getting them to clean their room. I love a clean room, especially one that I did not have to clean! 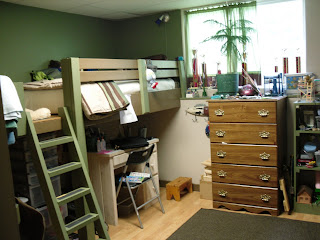 Labels: a clean room is only clean for hours, messes take hours to clean and only minutes to make

Someone told me once that it just keeps getting better and better! I found that true. The terrible teens are a myth. All of us go through periods of equilibrium and disequilibrium. You've laid down solid ground work and will continue to learn and grow along with kiddos. I love that you understand how fleeting this time is. It does help to know that there's an end to the messes. We can put up with just about anything for a limited time huh? It also helps us to savor the wonderful moments.
The Barbie wedding description is hilarious.

Bathtub Elmo must be different than tickle me Elmo. Does Bathtub Elmo giggle when you touch his tummy too?

The rules in my house are you play with it you pack it up. Other wise things seem to go walkies. My son is really good at packing up but the oldest girls well she not so good but quit clever. When she's finished with a toy, she asks her brother to play. As if he played with it last the rule is he packs it up.

I understand where you are coming from on this one. It will be nice the house once again is free of kids stuff and there is room for the things you want.

this is a sweet post. there will be moments you will miss all of it.

I really miss making forts. It was so much fun. ; )

I applaud you for all the hard work both behind and ahead. That kid raising stuff can be hard, I hear. I really understand that mindset that would lead to a post such as this...realizing things will change sooner than we think. ; )

i've been thinking recently about the things i'll miss...mostly as i see S changing this summer, becoming more of a true "tween" and feeling the moments of her being so much fun (and listening to us) are so fleeting...it's both good and bad, isn't it?

I am coming over to visit after reading Julochka today. Of course, I see you there quite often and love your comments. Really glad I visited you today for even though my kids are a bit older, I have still have the same "growing pains." I do so miss some of these moments (although our Barbie moments entailed some gruesome hangings ~ too much testosterone in the house), but I still keep the blocks around, just in case they are inspired.

If you ever need a sneak peek stop on by my place. I think this story may match your post today: http://110penned.blogspot.com/2009/05/bricks-that-stick.html. It never changes...

Nice post! We miss everything once in a while.