My take on John and Kate

This is my second post for the morning - see other one right below this one... see why I am speechless, and why this is reallllly bad timing!

I was in the salon getting my hair cut yesterday. As I waited I was presented with a basket full of magazines. These of course were all gossip related mags. Well, since I am not promoting these magazines by spending my own money on them .... why not take a peek. This is what I saw- John Gosselin (from U.S. tv show John and Kate plus 8) running around France with a girl over a decade his younger. This 20 days after his divorce was finalized. 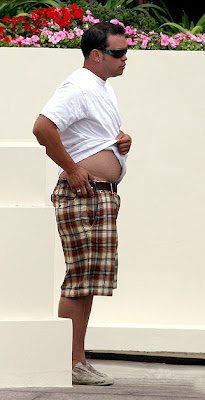 I am not a big one to share celebrity gossip. It is what it is (or isn't).

But, there is something that I can't help wondering....

Why is it that a guy gets to go running off to the South of France while the mom is stuck at home with the kids. A guy gets to have a (not so) mid life crisis and go running around with a (too) young girly and the mom is stuck with the responsibilities. Yes I know, that according to the agreement Kate will get some time off and John will be at the house with the kids. But, my guess is during this time she will be planning things for her kids. Thinking of things around the house. 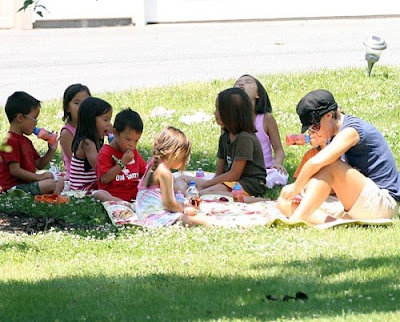 I do not favor Kate over John on this issue. I CAN NOT believe I am even writing an entire post on the topic - but seriously here folks.

In fact I have been in defense of John all along. See here. In fact I think Kate was a over bearing, controlling, b*tch, who quite frankly I couldn't have lived with either. I also think that people give up too quickly on their marriages.

It has been interesting for me to watch. How money and fame can effect a person - in this case in two opposite ways. As a married women I would like to think if I had been in that situation I would have seen it coming first of all (had Kate been home long enough inbetween book deals and promotions she might have ) secondly - I would love to believe that I would do what ever it took to keep my marriage - drop the show, seek counseling, move... whatever. Had John been more forceful with his feeling, stated that it wasn't enough to stay home and that he felt incomplete. Men need jobs- usually out of the house to feel like they are contributing, it is inborn. Regardless, there are kids involved here and their future is what matters. Enough.....

Back to the point. Men and their need to "get away". There are days, hours, moments- damn - !weeks! when I dream of jumping a plane with a hot young thing (you, of course Dearest ;) and jetting off to the South of France, or to a movie in my own town... sigh.... just sayin'

And I won't be saying anymore - cuz gossip is just that.
Posted by Just Jules at 8:31 AM

Im so with you on this one girlfriend!!!! and thats all Im sayin cuz I just dont want to get started!!! and hey now you have a topic for later tonight!!!

Just Jules says:
"In fact I think Kate was a over bearing, controlling, b*tch, who quite frankly I couldn't have lived with either."

I just wanted to point out that I heard this about her often-never actually having seen the show. To that end, I have heard that he is a bit of a way laid back dude. I think it is easy to judge Kate for what was viewed in the show, but keep in mind that the house has to run and, maybe pre-Jon Kate was more easy-going but his inability to pick up the slack and rise to the occasion created the monster that the public sees today. It would certainly make sense considering he felt quite comfortable leaving her holding the "bag" of children and the burden of guilt while he chases a much younger, responsibility-free suitor.

I've been watching this family for most of their televised seasons and reading about them as of late....
I think kate wanted counseling and john wanted out...but I agree, I don't think I could live with kate either, as she was a bitch and treated him poorly...

he is young and was so young when they got married that I just think he's living out his younger years that he missed out on....is that right....NO...and with that hailey chick...give me a break....

and kate is being a true momma bear to her cubs and no matter what happens she will protect them even if the show continues next month....

but I do have hope that whatever happens, those kids will still be loved as much as they have been and that jon realizes how much those children need him around as much as possible....

if kate had went on her vacation first, this post would read differently. Jon would be the father working his ass off for his kids, and kate would be just that, the over bearing bitch you spoke up, who gave up and left.

Having had my wife decide she didn't want to be married anymore, and take off with all manner of internet men only to realize that in the divorce she would lose the house causing her to return to alienate the kids against me, I can tell you Jon's "abandonment" is not restricted to men only.

Ahh Adam - Kate did go on vacation first. Right after John left. She took all of the kids with her.

Now, would I jet off somewhere if I were him - yes. Would I do it publicly with a 20 some year old... I'd like to think no. I get why he needed to get out and enjoy himself. I totally agree that he was shut down way too soon, but he could be a little more descrete for his family's sake.

I know he does love the kids and "rumor" has it that he is indeed even the better parent with them - I don't question his fathering ability. Just how he is portraying himself as a father.

I was introduced to /John and Kate by a Canadian blog friend. We don’t get that series in Australia. I thought it was a comedy sketch and found them both hysterical - Kate and her overpowering ways and John, the weakest man on earth with no self respect.

I totally agree that men get to walk away from their responsibilities, my ex chooses not to see my kids, and if he does he visits at my house for an hour. We haven’t seen him at all this year. He doesn’t ring the kids on birthdays or Christmas or give them gifts. I often go months with out child maintenance payments. I provide all the emotional, physical and 99% of financial support for my children. While he gets to go off and live in an expensive inner city apartment and have enough free time to meet women and re-marry. Leaving me with the 24 hours job of looking after children. Your post is totally on the money.

However experience has taught me no matter how much you want a relationship to work, it will only work if the other party is as committed to making it work as you. If the commitment is not there by both parties all the counselling in the world will not help.

It stated that T. Allen and Sandra had very valid points. This is why I don't typically do "gossip/celebrity" stories. In fact I don't do gossip. We never know the whole story - ever!