Down the river instead of up a creek 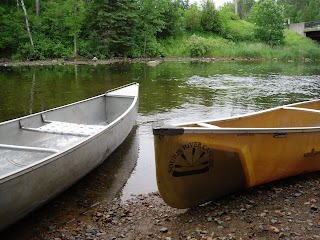 We made it 10 miles down the Mississippi River. We started just on the edge of the lake and paddled to a landing quite close to our house. It was cold, it drizzled, it was windy... and it was fun. It was relaxing. There was good conversation. There was a ton of wild life. There was no one else out there. (perfect) 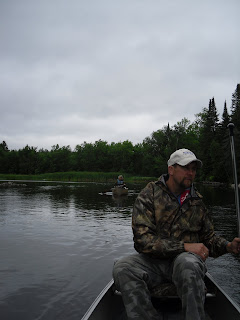 Dearest steering. Cousins in canoe behind.
Click to enlarge

RxBambi said it best (in her comment) - Minnesotans are hardy. Plus, we are stubborn. Any one of the four of us could have called it off. But, we all just kept the idea of going. Thowing one more sweatshirt on before we left. (wishing for gloves when we got there) 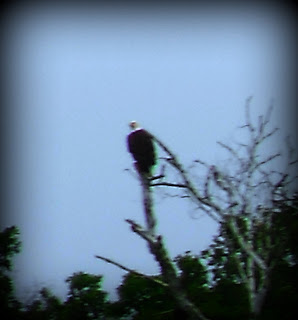 We were the only people out there as I said. Which left us with plenty of opportunities to see a variety of wildlife, mostly birds. We did also see a beaver and one doe. Blue Herons, bald eagles, ducks, and loons were plenty. 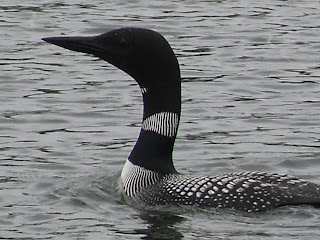 This is an untouched picture of a loon. That is how close she let us get to her. We realized later we were between her and her baby. She was not happy about that. The loon is Minnesota's State Bird. 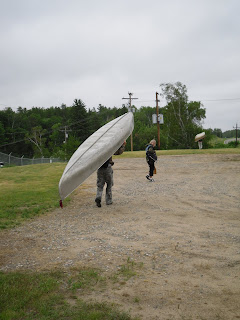 1/2 way through the trip we needed to "portage" (carry) our canoes around a power dam. We being the guys.
click to enlarge
Leaving me to carry the contents of the canoe. 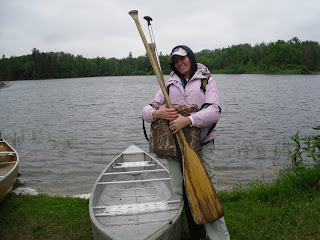 Don't I look so warm and toasty? Nothing like a nice canoe ride in the middle of the summer (July - the hottest month of the year!!!!! haha)

We are going canoeing today. Down the Mississippi. However.... the (friggin, gosh darn, fruit loopin, sending me over the edge of depression, unbearable) weather is not cooperating (again).

I will be back later with pics down the river. We will be taking "Buller" with us too.
Posted by Just Jules at 5:25 PM

Labels: dearest and I still got it when it comes to paddling in synch, I froze for a good part, man it was cold, we did not find the right campsite to eat our lunch at

Send that rain on down here. We are getting desperate. I think they're cloud seeding to control the weather. Only right around my town because it's been raining all around us for days. But the rain mysteriously disappears at the city limits. ?? The grass is all dead.

Funny writing! You are so clever....you still surprise me. I'm so glad you all are getting out! Can you all fit in one canoe? I can't wait for photos. 20% chance of rain isn't too bad. I bet it'll hold out for you.

it's cool and dreary down here as wll. i actually like it cool, but because of my broken wrist i'm not able to get out and work, which is what i like to do when it's cool. enjoy your paddle down the river.

I thought you minnesotans were a hardier bunch;)

Just try not to fall in and you should be fine. Enjoy the outside time!

Sounds great, bad weather or not. Get out and enjoy! Get wet! Get every one else wet!

Ha! I would not have seen that Telluride hat had you not directed me! Like his smile too! Yea! for the day! So glad it was a success. Didn't know what a loon looked like, beautiful bird. Like your pinky purple jacket too!

I hope the weather starts cooperating with you and your plans...Have a good time :)

it looks like you made the best of it. and good that the boys did the portage. :-)

and somehow, with what i know of minnesota politics (rudy perpetch (sp?), jesse ventura, al franken), it seems fitting that the loon is the state bird. :-)

Oh, I forgot to mention, that I think the kids should stay with me while you go to the headwaters! You can float down and pick them up when you are ready!

a huckleberry fin adventure! love it!

That picture of the Loon is magnificent!

Stopping by to give a little blog ♥

It looks like you had a great time. That's what you needed!To get outside and have some fun. Doesn't matter what the weather is as you can always dress for it. It's going to be a cool summer, I think. Might as well enjoy what we have!

That looks like a cold July! But fun, too.