Dearest and I have been married for 11.5 years. We were together 3 years prior to that (1.5 yrs of which we lived in Colorado together). We met just before Christmas in 1994. So when in 1996 our Anniversary came and went I was a little annoyed (to say the least) we had even gone for a hike that day to take in some views - I thought for sure he would ask me to marry him on the top. I remember walking down the road, off the mountain, and stopping as our descent became obvious. What? We are heading down? He didn't ask me to marry him!

You need to understand - for me to remember this it must have weighed heavy on my mind (I have a terrible terrible memory for events and places we have been ) However, 3 days later, as we were taking the 2.5 hr trek to the airport we stopped for a picture. Something we did often - being by ourselves we relied on the self timer a lot. But that was the moment. As the timer went off he dropped to his knee and asked. It was in the middle of The Unaweep Valley.

So, although it is not our Anniversary I am remembering. I am thinking about this. 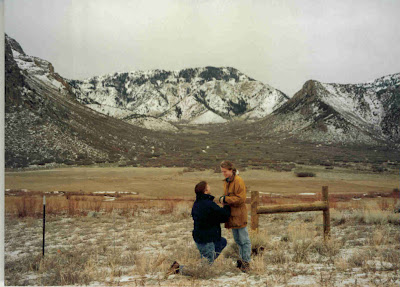 I said.... nothing-
I was waiting for tears
When they didn't come
I finally said, Yes.
I am doing so because we are going back.
We will be driving right past this location.
We will be able to get out and show the kids.
Will it matter to them -
not really, they are too young to understand.
But there is something full circle about going back
(together- since I have been back once since, but I was by myself) 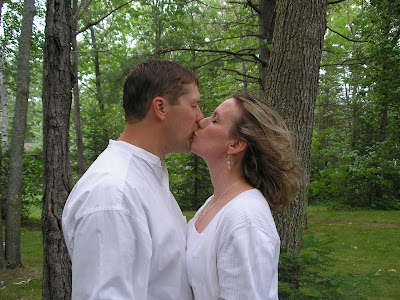 We said I do (again) last summer at a vow renewal

We will be in the SW corner of Colorado where we lived for a few years. We will be staying with my dearest friend Deb and we will be touring around the area - Mesa Verde, Telluride, Ouray etc. before heading back - taking in the sites along the way.

But, as we drive past this location.
We will stop
(after we stop fighting over which set of fences it was exactly)
We will get out. We will remember.
We will say I do all over again. and again. and again.
Posted by Just Jules at 7:26 AM

Labels: Colorado, I hope the weather is warm, it is a trip not a vacations, vow renewal

Ahh! There are tears! I have to go get kleenex. Ok, back! Amazing her captured the moment and surprised you. We intuitives are hard to surprise. I hope that there will still be elk playing in the water. Watch out for the bunnies on the road.

I'm getting all emotional - that's such a lovely story... and things our hearts desire always happen differently than we think they should, but they're always better... funny how God works like that ;)

Enjoy Colorado!! I love Ouray and that area, SO beautiful.

Too cool!!! Get more photos with the kids and the fence...can't wait to see!

R U kidding me... that is so romantic!!!! Now I'm really pissed because my hubby doesn't have an ounce of romance and didn't even get on one knee!! or take me anywhere or do anything special!!!! I do have a post planned about how we met but it's not romantic at all. I love this and will wallow in reflected romance!!!! Good for Dearest!!!!

Awwww, so sweet, Julie :) Thanks for sharing such a lovely story and your pictures with us :) I am smiling :)

Have a Beautiful Day!

Wonderful story!! Umm, I had to hand my husband the ring when he Officially Asked Me To Marry Him. HAHAHA. Oh well, we were old (I'm young now of course). Anyway, I love the romance, especially since you didn't expect it. I think your kids will love the story!

Such a beautiful story!!!!

oh wow, such a sweet story, glad to see real love still resides in peoples hearts, enjoy your trip. (and you should get the whole family right in that same spot for a picture... priceless) :)

Thanks Jules for that wee bit of romance you shared with us!