My friend's relative has the swine flu. It is a child and she is quite sick. The mom is suspected to get it too, or already have it. This is a story we will hear repeated over and over. But, do you rush out and get a s.flu shot? I would do some serious independent research first my dear bloggy friends.

What I do know is this - your best line of defense is a healthy immune system. Yep, good old fashion - taking care of yourself. Eat well, drink plenty of healthy liquids (d.coke is NOT healthy), get plenty of rest, wash your hands wash your hands (washyourfrigginhandspeople!!!!)

Really- again, I can not stress it enough. Do your own research. Don't let the media's hype scare you into a decision when you are unaware of it's consequences.

I ran across this article and thought it an interesting take. Taken from Dr. Mercola.com 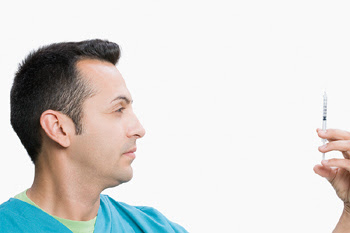 Surveys and focus groups show that health care workers, as well as members of the general public, may avoid getting swine flu shots when supplies become available this fall.

In May of this year researchers distributed 810 questionnaires to public hospital workers. Less than half of the nearly 400 workers who returned the questionnaires intended to accept pre-pandemic H1N1 vaccination.

In a separate article, very few of 85 focus group participants in British Columbia said they would be willing to be vaccinated in the event of a pandemic, and very few people said they or their children would definitely get vaccinated.

The most common reason for refusal was potential side effects, followed by questions about the vaccine's efficacy.

The United States is set to receive as many as 600 million doses of swine flu vaccine, enough for 300 million Americans.

Well, the fact that less than half of nearly 400 hospital workers questioned planned to accept the swine flu shot is very telling, though not surprising considering the majority of health care workers also refuse the seasonal flu shot.

The most common reason given for refusal, and rightfully so, was potential side effects, followed by questions about the vaccine’s efficacy.

Even among a focus group of 85 people, very few said they would get vaccinated in the event of a pandemic. Again, many noted the risks involved in using newly developed vaccines that are rushed to market as a primary concern. Many also believed, correctly I might add, that they could protect themselves through their own behavior, including:

These sentiments are right on, as it is the health of your immune system, which is primarily controlled by your lifestyle habits, that will keep you healthy during a flu outbreak. A vaccine is not the answer, and in fact can cause many other health problems.

Fortunately, this site, and many others seeking to shed light on this deceptive manipulation about the swine flu, are making a huge impact and people are refusing to believe the government propaganda.

Vaccine safety advocates everywhere are beginning to make a serious dent. According to a recent Fox News poll, the majority of people in the U.S. now believe the swine flu vaccine may be deadlier than the actual virus.

Why the Swine Flu Vaccine is a Disaster Waiting to Happen

Count yourself lucky that you still have a choice about whether or not to receive a swine flu vaccine … as I would no sooner choose to get this shot than I would run through a field full of landmines.

For starters, the swine flu vaccine contains dangerous additives such as mercury and squalene, which has been linked to the development of autoimmune diseases like rheumatoid arthritis and lupus.

Further, senior neurologists sent a confidential letter to the UK government warning that the swine flu vaccine has been linked to a deadly nerve disease known as Guillain-Barre Syndrome (GBS). GBS attacks the lining of your nerves, causing paralysis and inability to breathe, and can be fatal.

German lung specialist Wolfgang Wodarg has also come out about even more potential health risks associated with the swine flu vaccine. According to Dr. Wodarg, the swine flu vaccine contains animal cancer cells, and there’s no data indicating whether or not this may cause an allergic reaction when injected.

It also raises questions about the risk of contracting cancer.

Likewise, Johannes Löwer, president of the Paul Ehrlich Institute, believes the side effects of the vaccine can be far worse than the actual swine flu virus, which typically causes only mild symptoms, requiring just a few days in bed.

Swine Flu is Typically NOT Serious

Media reports sensationalizing the “death toll” that could come from the swine flu are just that: sensationalized.

As you may already know, the Centers for Disease Control (CDC) consistently claim the seasonal flu kills about 36,000 Americans each year. After investigating that figure, it has been found to be a gross exaggeration based on flawed data compilation, but still, the swine flu has claimed FAR fewer lives than the seasonal flu in any given year, and no draconian measures have ever been taken to curtail the seasonal flu.

Dr. Wodarg told the German press that the widespread fear of the pandemic was an “orchestration,” stating:

“It is great business for the pharmaceutical industry. Swine flu is not very different from normal flu. On the contrary, if you look at the number of cases it is nothing compared to a normal flu outbreak.”

Before you accept a vaccination, or allow your child to receive one, it’s always wise to examine the benefits versus the risks. In the case of swine flu, most often the symptoms are mild and resolve on their own. But no one yet knows what side effects could come from taking the swine flu vaccine.

Fortunately, for now the vaccine is still voluntary but there has been talk that it may become mandatory. For a great review of why mandatory vaccinations are unconstitutional and illegal, I recommend the book “Horrors of Vaccination Exposed and Illustrated; Petition to the President to Abolish Compulsory Vaccination in the Army and Navy,” by Charles M. Higgins.

Written in 1920, the book is now in the public domain and can be read and downloaded for free by clicking this link. It discusses the dangers of vaccinations, the cover-ups of vaccine deaths, and explains your constitutional rights and the medical trends that are stripping those rights away, and is every bit as relevant today as it was when it was first written.

If you prefer a hardcopy version, you can also purchase the book, as it has recently been republished.

An Ounce of Prevention is Worth a Pound of Cure

When it comes to preventing the flu … any flu, including swine flu, natural prevention is your best option. Taking care of your health to reduce or eliminate your risk of contracting the flu is always going to be your safest bet. This past article details my top recommendations for avoiding the flu naturally, and I strongly urge you to start incorporating these changes into your life today.

I also strongly suggest you make sure your vitamin D levels are optimized prior to flu season, as vitamin D is a powerful flu fighter.

There is so much compelling evidence that I believe optimizing your vitamin D levels is one of the absolute best strategies for avoiding infections of ALL kinds, and vitamin D deficiency is likely the TRUE culprit behind the seasonality of the flu -- not the flu virus itself.

Ultimately, your best bet is to maintain healthy levels of vitamin D around 60 ng/ml year-round. Please note that this is far higher than most doctors will refer to as “normal.” Rather it is the optimal level you’ll want to maintain for disease prevention.

Want to Learn More AND Get Involved? Attend This World-Class Vaccine Conference!

This video originally aired August 12, 2009, featuring CBS News Medical Correspondent Dr. Jennifer Ashton and NVIC's Barbara Loe Fisher. Here they discuss the possible dangers of the swine flu versus the H1N1 vaccine. Both provide sensible information and guidelines on this issue. I can’t stress enough how important it is for this type of information to make it into the conventional media.

Interestingly the swine flu vaccines are going to be available in the U.S. around the time the finest vaccine conference in the world will be held. If you want to learn the absolute latest and best strategies for swine flu, then Washington DC is the place to be October 2-4. I will be sharing my strategies live at the event.

So join me at the International Vaccine Conference in Reston, Virginia (Near Washington, D.C.). It is the best vaccine conference in the world, and is only held about once every five years.

It is relatively inexpensive to attend, and highly recommended. But you’ll need to hurry to reserve your seat, as there is only room for 1,000 and the seats are going quickly.

This conference includes the best of the best speakers on this topic and I am VERY excited about attending. Plus, Washington DC is absolutely delightful in the fall and all the world-class museums there are free.

It is only $195 for the weekend and the hotel rooms are severely discounted. So even if you are only considering going, you should register for the hotel as there is no charge to cancel your reservation.

I am with you on this. I heard about the vaccine and immediate was leary. While I get my kids and myself flu shots and pneumonia shots (were are severe asthmatics), I don't know about this. the swine flu scares me with the asthma and all, but this vaccine makes me even more nervous!

I have had one flu shot and that one only because I saw the Dr. for a sinus infection and was injected for flu before I knew what was happening.

I heard awhile ago about the additives in this vaccine, but I would not have gotten it anyway. I don't trust the FDA. Hopefully somethings will change, but I see it as an arm of pharma, there to rubber stamp their products.

You're preachin' to the choir sister! I'm with you here!
Keep spreadin' the word tho!

Thanks for the peek behind the curtain! The 'wizards' are truly runts with an agenda!
This here is some top-notch research, and should be taken seriously by EVERYONE!

did you know heart disease kills more than the flu....wash your hands, have lots of sex [there too many medical reasons as to why it's a good idea, but why not have a little fun when the world turns into the world that Will Smith was on in Legend?]

My theory is that the swine flu is just a government conspiracy to try and push healthcare reform.

how sick is that?!

Could you be more wrong!!!! I cannot believe that you even had the guts to write that!!! I thought that we were soul sisters!!! Do your research honey, Diet Coke is healthy for you!!! You have been led astray! Get the facts!! Diet Coke is better than Prozac, and even better WITH Prozac!! I have said my peace...I hope we can still be friends.