Why does everyone think they are Irish on St. Patrick's Day? 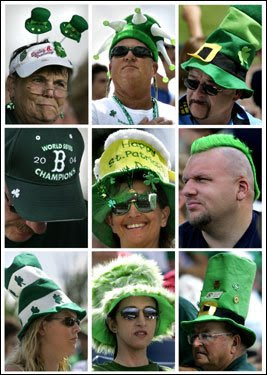 I guess these people don't know or don't remember what it was to be an Irish-American during the immigration/potato famine. Consider this:

...No group was considered lower than an Irishman in America during the 1850s...
...Our immigrant ancestors were not wanted in America ...Ads for employment often were followed by "NO IRISH NEED APPLY."...

...They were forced to live in cellars and shanties, partly because of poverty but also because they were considered bad for the neighborhood...they were unfamiliar with plumbing and running water. These living conditions bred sickness and early death. It was estimated that 80% of all infants born to Irish immigrants in New York City died. Their brogue and dress provoked ridicule; their poverty and illiteracy provoked scorn...
The Chicago Post wrote, "The Irish fill our prisons, our poor houses...Scratch a convict or a pauper, and the chances are that you tickle the skin of an Irish Catholic. Putting them on a boat and sending them home would end crime in this country."
From this site
~:~:~:~:~:~:~:~:~:~:~:~:~:~:~:~:~:~:~:~:~:~:~:~:~
I know people are just looking for a reason to have fun - to go out and be social. I understand. 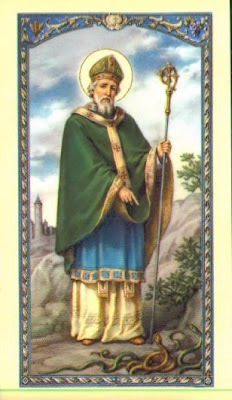 But First:
Being 1/128th Irish does not make you Irish
Learn the History of St. Patrick
and Ireland
and the Immigration
and then for fun check out this site:
10 fun facts about St. Patrick's Day (image on site not suitable for children)

I can cook and WOW do I have a temper!!

I love it Candy! Happy St. Patrick's Day to you then.

THANK YOU! I'm going to pass this on to my brothers and dad, who like to think that, because we're a little Irish, we're full out Irish. It makes me batty! I hate to burst their bubbles, but we're more German and Czech than anything else, along with English, Scottish and Welsh for "variety".

By the way, I added myself as a follower of your blog yesterday - I found you by way of ModGirl and was very intrigued by your trip to the farm for fresh milk :) I hope you don't mind!

My maternal grandparents came from Ireland. St. Patrick's Day celebration was frowned upon. It's an excuse to have a rather drunken party. : )

i have felt so out of touch this past week! Damn,

I am part Irish and my wife is totally irish.

The Shamrock is a symbol of the holy trinity! DUH!

I also have a chaladuh [spelling?] on each hand. The ring represents the three symbols of a relationship [loyalty, friend ship, and love]. How you wear it determines how "available" you are. My family also follows an Irish tradition. When an irish boy is born, his mother will fold a hanky into the shape of a bonnett for him to wear home from the hospital. After the boy is arrived at home, his mother will unfold it and lock it away safe, and when he gets married, his mother shall give it to his new wife before the wedding and she will carry the item down the isle on their wedding day as the 'something old'.

I love being even just a part irish.

I think whenever you have a reason to celebrate, not have a drunken party, can't be bad. As you get older, it is something to look forward too but I do agree that the people that are not Irish can go out with the Irish but shouldn't pretend they are Irish, if that makes sense. Anyway, I am Irish so I did wear green. Happy St Pat's Day!

Thank you! I totally agree. Being Irish is SOOO much more. It's about struggle and family, and pride. I'm so proud to be Irish. I'm so proud of my ancestors and appreciate all that they did so that I could be in this land of opportunity.... and I appreciate the stories my Grandparents would share with me about that struggle. The signs (like you have above, but I recall the ones they told us about that said "No Irish or Dogs allowed") and the attacks. But those struggles made them strong, and amazing people. I love them for all they gave to us.

And I must conclude with....

Thanks for commenting on my blog. We are a crazy bunch here. Always having happy hour parties for every occasion.!