I have a cat. He is old. 11-12 years old now. His name is Lou. I brought him home right after my baby (dog) was attacked by a large animal and died over night at the vet. I found him at the tire shop when my car was being worked on. He was going to be killed because the pound was full. He was no bigger then the palm of my hand. I needed something. He was there. 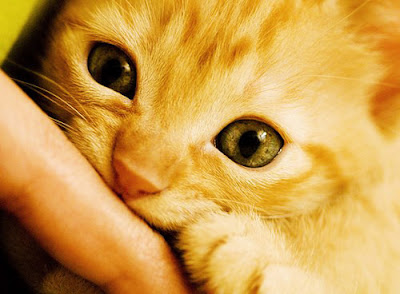 He has been around since before our children. I learned early on that he wouldn't hurt the babies even though he insisted on sleeping right next to them. However, all along he has had a short temper. A mean streak if you will. He usually tends to hide in the basement when things irritate him and this is fabulous. But, every once in awhile - if you pet him wrong or he can't handle it anymore he bites.

But before he bites he always licks. If you have ever been licked by a cat it is a weird sensation. They have a very bumpy, rough tongue. It almost feels good. While you are trying to decide whether to let him lick you or to push him away you are interrupted in this thought (milliseconds have passed here) he bites you. Hard enough to know he is mad but not so hard that he makes you bleed. Just enough to leave you cautious. It took me a few times to realize what was happening and that this was his m.o. But now I see it coming and I try to push him downstairs or change his thought process before he gets to that point. Now however he is onto me. He lays in wait and attacks me when I least expect it. He attacks my shins or ankles or tries to trip me down the stairs to my death.

Now where am I going with this? like you care about my cat? However it is a comparison.

There are people in the world that act the same as my cat. They lick you before they bite. Now, not literally... it is not like they walk up to you and start licking on your cheek or arm and then actually chomp their teeth down on you. No. Instead they act so nice to you, even butter you up a bit. But, when something doesn't go their way (or for no reason at all) all of a sudden they "bite" you. Like the cat a person learns quickly the tell tail signs of these people and are soon able to see the bite coming, until you are surprise attacked and thrown down the stairs to an immanent death....
Posted by Just Jules at 12:21 AM

I know I should be focusing on the last paragraph here(the good news is that, yes, I have registered the 'watch out' point of the post), but I can't help but smile thinking of your cat, as he reminds me of the cat we had when I was a teen. Not so much the bite, but the i-will-hide-in-all-corners and attack you just for the pleasure of seeing you leap about like an undignified frog every single time!

I have experienced people who are like your cat. It's much easier to forgive the cat, since they are not mean inside like the people who do this.

Every cat I have owned will bite and Margaret does the hide and attack thing. I now have the image of "leap about like an undignified frog" in my head!

People usually show themselves if given enough time, just like your cat.

Unfortunately I've come across far too many people that are just like that!

Push em down the stairs!!

Geez! I'm sorry, why don't you just send me an email!

unfortunately I know all about the lick lick bite. and it's usually a man. I was going to say woman, but then I thought of all my old exes and realized that sometimes they all suck.