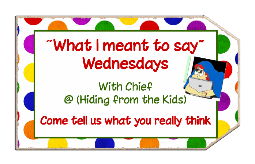 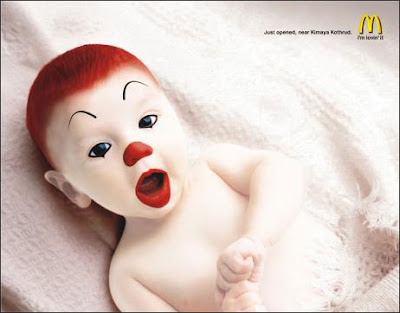 Story:
I took my youngest to (I really don't want to admit this but here it goes....) I took my youngest to McDonald's today (seriously, how gaggy I know!!! yuk, uck, gross, so unlike me) But, we were there, at McDonald's. In the playroom was my youngest and I, and two other moms. These two other moms had 3 children and a baby between them. The one boy was sitting at the table and eating while reminding the other children to "come take a biiiiittte". Fine - he was about 3 and cute as a bug's ear. However, the two moms were seated at another table away from the kids, not far away, but away. They were chatting (read:gossiping). They were loud, or the one mom was loud. She was going on and on and on about this that and gosh knows what (or cares).

Well, every once in awhile the mom would hollar up "....Ryyyyyaaannnn, come take a bite and then go back and play.... Ryaaaaannnnnn.... R.Y.A.N. Come take a bite, and not just of a french fry" this continued (change name per kid) over and over and over loudly, whiney-ly, annoyingly ... yeah. Every once in awhile she would throw in a "or else" and a "now" .
What I wanted (meant) to friggin say was - Your threats are empty and your kids know it. They are not now or ever going to listen to you, because they know your "or else" and "now" is full of crap.
Now this continued the whole time we were there. My (perfect, sweet, wonderful) son was sitting at the table eating his food before he could (1) have his toy (2) go play in the playland. He knows that we will pick up and leave if he doesn't listen to me - we have done it before and we will do it again - my threats are not empty people.

Next (I want to slap the crap out of you) moment was when this same mom (of the year) then starts in on how "stupid" the kindergarten screening was. How her son had to do this, that, and the other thing and it was so "stupid". She was telling her friend that she would not do it again - her friend should just skip it, cuz it was...... "stupid". 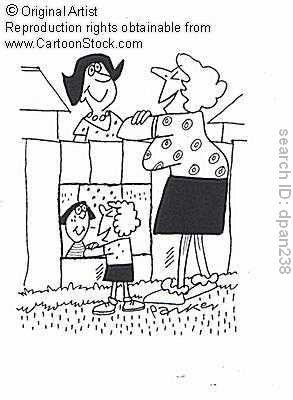 What I wanted (meant) to friggin say was: You "stupid" fool you. It is a Minnesota State Law - your child must have a Kindergarten screening before they will be allowed to enter kindergarten. OhHHHH and that tower that you said your son was suppose to make - that was so (you guessed it) "stupid" and the same tower you said you can't even make - my son made it when he did the screening when he was three. Now who looks "stupid"????? Dumb B*tch.

But instead I tried very very hard NOT to stare at them and be amazed by her ignorance, I bit my tongue (hard for me to do) and walked out.
pics from
Google image search
Posted by Just Jules at 7:27 PM

Labels: stupidity, What I meant to say

WOW
you are really a meanie hiding behind that purty smile!!!!

The empty threats are worse than making none at all. Did she count too??

I do admit that I count. I count from five down... but My God if you aren't here by One you will be sorry for real!

Being consistent has always been one of my weak points. My 17yr old yelled at me recently because (get this) I told her she COULD go out. She wasn't grounded anymore and could go with her friend. She told me I need to be more consistent.

mnhrmmm, i've heard the empty threats, and i too (even tho childless) know you must follow through. must. or you will lose all sorts of verbal authority. kudos for not saying anything. i'm pretty sure she would have called you stupid for saying something. =0

I think one of my successes (however small) as a parent is that my daughter listens to me. Sometimes I have to shoot lazerbeam looks her way, sometimes I have to do squinty-meanie-face...but it works and I don't have that McDonald's lady's problem one bit.

And I feel good when I'm with kids who don't listen to their mothers and my child does what I ask. I feel like...nyeah nyeah nyeah!

Ohhhh moms like that really piss me off. My kids are the same as yours. We EAT and then you play/do whatever you want. When it's meal time - you sit at the table and finish your food FIRST!!!!

I wonder how you kept yourself from marching over to these inept moms and giving them a piece of your mind! Maybe I would have done it if it really got on my nerves. I am somewhat of a scary person at times and mean too.

Funny you won't believe this...but I rarely pay attention enough at places like that! Hehehehe I'm usually reading or on my phone in my own little world while my little one plays.

And who knows how the lady is at home? I sometimes yell at my little girl to come and eat some more...but I don't really care all that much if she does or not...but it sounds like this lady did...so yea annoying if you can't zone them out for sure!

We only go to McDonalds when I want to zone while my little one plays...so like everyday! I kid I kid hardly ever really.

Anyway that threw me, but you made me laugh this morning!!! :)

McD's is not a safe place for you to visit Jules. Step away from the bad mommies, just step away!

At least you got to feel superior to the "stupid" mom. I know I dod in situations like that. Mykid knows there will be follow through if he doesn't do what I tell him.

This is especially close to my heart as I am the one who does the kindergarten screening at school!

Thank you so much for linking up! I know I am going AWOL but I gotta get some stuff worked out and then I will be back in full force! Don't forget about me!