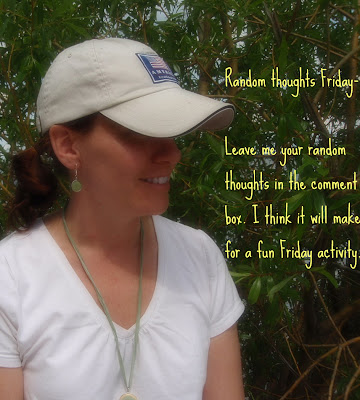 Well there you go. What a good idea. I took this idea from Shelle (I haven't had an original idea since 1999). Since I can't be on a plane to Blog Camp and it looks as though I don't have much to say other then random thoughts - I thought maybe others were in the same boat. So think randomly HERE, in my comment box. It could be highly entertaining.

Plus, as an added bonus I will throw my random thoughts into this blog through out the day as I have them (except from 11 - 3 when I have appointments)....

Now, go think randomly :)
Then go see Shelle - she is the cutest thing ever!
Posted by Just Jules at 8:20 AM

Labels: I am not pouting that I am not at blog camp, I booked salon appointments to forget about not going to blog camp, that is indeed me in the photo, yes I am pouting

We went to the movie "Hangover" last night. I haven't laughed so hard in such a long time! Not MY type of movie at all. Or so I thought - go people, ignore what it looks like, just go!!!! Funny stuff right there.

warning - if you ARE easily offended then skip the picture slideshow at the end of the movie, the rest really is PG 13ish... well maybe PG 18ish:)

MUSICAL BLOGS!
I want music to play when my blog opens! Know how to do this?

I love my new skirt that came in the mail and actually fits!

My husband woke me up. He was watching tv and said, "wake up , you have to hear this, Obama is talking like a preacher not a president".

The best advice I got is that your taste in music is perfect - for you, not everyone.....

I wonder what the blog chicks I know look like naked.

Is that random enough?

We are randomly going to Minneapolis today for a Twins game!!! Believe me, this randomness occurred very late last night and within minutes of our musings, we had a cheap hotel rate, not so cheap but good Twins tickets, a dog sitter and we're off! Happy Random Day, I think I am going to like it!!!

Must buy the dog some new chew toys before she destroys something (else)...

I often forget we have mosquitoes here (the county sprays for them so many spots don't have them) until I go near one of the ponds they didn't spray and I'm eaten alive.

I need new chucks my black ones are screaming...."please find another pair... we need some rest" maybe a green one...hmmmm, or the cool colorful ones they have out now. :)

My random thought is a helping hand to one commenter here lol ...

Im pretty sure one of them has an option of having to press play. Though Im not positive.

11 to 3 you have appointments? Seriously? You big fat lair! You are taking a nap!!!

My random thing for today is keeping to my bed with my ankle. Have been reading blogs, books, some embroidery and sleeping all day. I will be well rested tomorrow, Hope I can walk again tomorrow.

My random thought for today is what in the world am I going to get for my neice's shower present on Sunday....and I'm going to cut out of work early today and go do something fun :D Really fun!...LOL
Have a Happy Weekend, Julie!

Southern Sage's comment kinda creeps me out!!! I had a different random thought then I read that one and well I lost the other one!!!

I really hope the Betty Crocker Hershey's Original Supreme Brownies enhanced with Hershey's Chocolate Syrup helps my PMS or else it is going to be a really long night.

My random thought is that today Nestle recalled their Toll House break and bake cookie dough. People MAY have gotten sick when they ate it raw, which you are not supposed to do.
My thought? If we want to do it that's our risk, right? Thanks to that news story I've thought about cookie dough all day.

Hubby needed help - I came. Setting up for the National Dock Dog Competition. We have a display.

When you whap your head you really can see stars! And no, it doesn't knock any sense into you - except to not do it again.

My kids are amazingly well behaved in public.

I got my hair highlighted and trimmed today. It was my "cheaper then therapy" day.

kisses to your head, thanks to Alex for the music tip, I'm with Dena, didn't appreciate Southern Sages comment. Hope you got good pics of your hair being hi-lighted! lots of love

ok, ladies, don't worry about Sage. He is perfectly harmless. He is just trying to get me riled up :)

My random thought? I didn't have one but I do now. I thought Southern Sage's comment sort of funny. The joke would be on him if I was one of those naked ones. Ha!! Bad dreams for a long time my man. : )

haha... is sage the only male blogger who posted something so far?

my random thought... i've noticed tonite that i'm in an angry mood and don't know why. don't have a good reason to be. just am. *shrug* maybe i just need to go to bed!

I'm so pleased to have a morning off watching Hans Christian Andersen (my children's favourite movie). Of course I could just turn the TV off...when we set up our tent last weekend for the first time my 3 year old asked 'where will the TV go'. OOps.

Also, where are my son's ear plugs for swimming?

Is there enough fuel in the car to get us to the gym?

Will the postman bring my props for my 30 secrets project?

I think Sage has some humor going on. At least that's what I randomly think this minute.

I randomly think that being in a room with all these naked (in my mind) female blogger chicks is a pretty sweeeeeeet deal for me!

HEY... your random post was a LOT more fun than mine was!!!

Someone did however say boobs in mine, so that counts for something! lol!

Thanks for the linky love!