You worry about you.

Ok, I may lose you here - sorry if I do.
Doing some deep thinking here
(ok, not THAT deep)

Last night I was at my wit's end with my kids. My girly stood up and started directing her younger bothers, which only made whatever situation she perceived to be a problem worse. Now, if she had just worried about herself, and her brothers (who are too young to quite grasp the concept had worried about themselves life would have been fine). This was my response to her. Girly, worry about yourself. I will take care of them. What they were doing was not a problem in my mind (making mountains out of the rug for their monster truck toys). Now I would take care of the boys because that is part of me being a mom. It was not her job as their sister. They were not harming her nor were they even in her way.

So, I started thinking as I was switching laundry loads this morning. If we would all just worry about ourselves this world would spin a little smoother. There would be less bumps in the road. I am not asking you to be a selfish mongrel. No.

I am saying- if we are the best at what we are suppose to be, then we would all be better off. 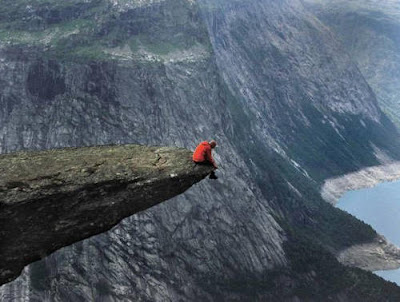 vi.sulize
If you are the best wife, mother, co-worker etc you can be wouldn't life be a little easier or at least better? This of course means that your husband, kids, and co-workers are in on the deal and being the best they can be too. If we all just worried about ourselves and what we are / aren't / suppose to be / and shouldn't be doing it would be a true nirvana.

So, today - try to be the best wife to your husband you can be. Think of one thing you could do that would make his day (vice versa for hubby to wife), don't you dare say ..."but he isn't going to return the favor, don't you DARE!". Act toward your kids as you would if your pastor was over for supper tonight. You know what I am talking about. Go into work today as if it were your evaluation day.

Every day we should act as though it matters - because it does.
Posted by Just Jules at 10:21 AM

Labels: deep thought, pondering, what do you think

What a fine line...not easy to do, but it would be nice.

*If those are your legs in your header...I'm going to be sick. Jealous. Envious.....maybe I'll still be your friend- I'm not sure. :D

LOL...I'd like to 2nd Ann's comment above me. I was just going tell you how gorgeous your new header is...and if it was you, how I kind of hate you now. lol

Love this post. I completely agree 100%...but I will admit that there are a lot of days that I don't feel I have the energy in me to give 100% and be the best I can be in ALL areas of my life. This is definitely something to aspire to though.

goodness knows that I do not achieve this every day - but I hope to in some small way everyday.

Just say they are your legs most of us would never know. We may not come back ount of jealousy but hey youd be know as the blogger with the best legs... lol..

Back to the blog. In an ideal world what you say is great and I would like to think i try most days.. but some, like yesterday, just being miserable felt like who i had to be that day..

Thanks for the thought provoking blog xx

still waiting for my real life friends to weigh in on the blog and the pic. Deb, Tiffany, Fawn, Mom, Dearest, come on....

I think they could be your legs because yours are pretty hot. I don't think you own a pair of shoes like that so I have to say "no they are not your legs."

Tonight I am going to try to be the best business owner, bookkeeper, butcher, father and husband I can be. I'll try anyways.

You did good - real good *wink

Great post and AMEN!
Are those your legs??? Sheeesh!

First the big question: whose legs?
I don't think they are Jules'. You have much curvier legs, those are long enough to be yours but I don't think yours are that skinny.

Secondly, what a great post! One of my favorite authors (Byron Kaddie) says, there are 3 kinds of business; yours, mine, and Gods. Being in anyones business but yours makes you crazy!

I don't think I'd seen your new header. Pretty :)

God, you know, I tell my daughter/kids this all. the. time. YOU worry about YOU. *I"ll* worry about everyone else.

But you are so right, if everyone else would worry more about *themselves* then what everyone ELSE is doing, things might be a bit better off. xo

i think the whole problem is that people don't always know what it is they're supposed to be...so it's hard to worry about you if you can't even identify you.

I've found that with those who make it a habit to be the best they can be on a regular basis, others will be forgiving when they're having an 'off' day

I totally agree. The impulse to control can really screw the world up in a cascading effect of resistance. The only way to make the world a better place, without causing struggle, is to worry about yourself and let other people find their own way. Unless they ask for help, of course.

My husband and I were just discussing this last night. The more rules, laws, and regulations (controlling tendencies) there are, the less moral responsibility people have. A study of history will reveal this. When I imagine a world in which many people are doing exactly what you say...being the best wife/daughter/employee/person they can be, I imagine a more peaceful world.

Well, this is a tough one for me. No I don't think those are your legs but I had to study them a little to decide. They look VERY much like yours, long, thin and shapley.
Regarding your post about worrying only about yourself would be in a perfect world which is not possible, especially these days. Being a mom,wife,and grandmother,& friend I worry about everyone and don't usually worry about myself. I have to start worrying about myself, however as I have been dealing with my illness again. Too much worrying I guess! Someone told me once that it was my problem so I won't discuss it further. Sometimes I wish someone WOULD worry about me.

I have been thinking about this 'only worry about yourself' blog. It would not be a perfect world if you only worried about yourself, it would be a very Selfish, cold, sad, world. Just think about it. Worrying about someone also means you CARE about that person or you wouldn't be worrying about them. If you didn't care, and no one else cared, everyone would be at each others' throats because no one would worry whether they got hurt, killed, sad, fed, clothed, etc. etc. etc. and I could go on. It would be total CHAOS!!!!!!