OK as you may or may not know, according to whether you have been to my blog or not, is that I am really terrified of moths. Yes moths, i know it's pathetic but it's always been there and it doesn't change, I also intensely dislike butterflies and small birds and anything that flutters or appears on the cover of novels like Silence of the Lambs.
My family are all aware of the phobia, the kids are more than aware, they like to tell everyone about how hilarious it is when a moth gets into the kitchen and all hell breaks loose. One landed on Syd's forehead one time and I almost took the poor kid out with a frying pan!!!! We all stood there screaming at each other!!!! I would have won $100,000 if someone had taped it!!
So, it's early May and Ash has a birthday coming up in June, she tells me about fifteen trillion times that she wants a Butterfly Garden, she repeats the commercial verbatim and tells me if I order now I can get the caterpillars for free, order with your credit card at 1-800-suckah!!! Now I didn't exactly do that (I make it a rule never to order from the TV, used to work for a BIG BANK and saw scams every minute of every day a lot of them involving purchasing stuff from the TV). I digress. I can't remember where I saw this thing being sold but I caved when I thought about her cute little face and how excited she'd be to get her own butterfly garden. I bought it! 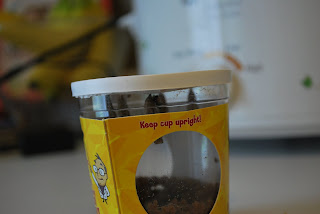 Happy Birthday, you're five and now you have a butterfly garden.
I opened it and found that you have to then order the caterpillars.... wonderful....another thing to prolong the inevitable....I made it about hmmm three months before I crumbled and actually ordered the damn caterpillars.
Enter new sitter, the girls were home for a week with a new sitter for Fall Break (for those of you outside the US, they get a week off school early October, we don't usually go anywhere special). I called new sitter and asked her if she'd do the honors and get the things out of the box and into the pop up hamper thing. Well she didn't have to,
they come in a little jar that sits there while they eat and then make their cocoons. It's after this stage that you have to move them, drat that means I'll have to wait a while and find another fool I mean helper to do it. 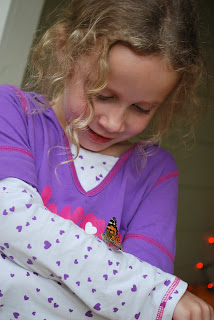 Of course they turn into beautiful little cocoons, as the directions describe them, you then have to pin the little piece of paper they are hanging from onto the inside of the hamper thingy.....this caused much drama... you're not supposed to mess with them much or disturb them, you try pinning the thing without jiggling them, all the while you have a five year old grabbing onto you, the hamper, the cocoons and screaming with delight!!!!!
We did it, they hatched, and then they fluttered. 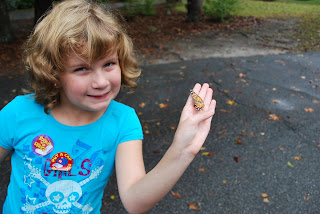 It was at this point my fear started to kick in, every time Ash went in there to see her "little babies" (she named them all) she would unzip the top and I had horrific visions of them flying all over her room!!! I would get butterflies just looking at her with them! Argghh.
So I managed to persuade her after a week or so to set them free, let them out into the wide world to go yonder and collect nectar and do whatever it is they do....and get the hell out of my house!!! 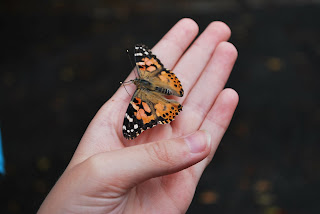 Actually it wasn't too bad, they were really kind of docile as far as fluttery bugs go, they would sit on the girls hands and let them hold them for a long time before they finally flew away. Yes, they flew away, far far away!!! Exhale!!!! 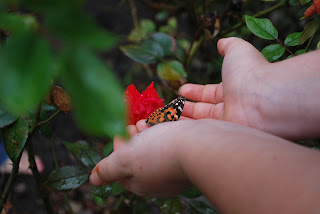 Now Syd wants one... I don't know if I can do it again!!!! How about a goat or a donkey or something??? at least they'd keep the grass down!!!
Thanks for reading and thanks again Jules for having me!!!

(have you started to notice?
how awesome my blog friends are?
I am blessed)
Posted by Just Jules at 7:00 AM

What a good mom you are! I did the tadpole habitat one year for my eldest son. But instead of ordering the tadpole, we went to the pet store and bought one. It changed into a frog and lived a couple of years. Then he found some tadpoles in a mud puddle to put in there. Unfortunately, I think they were toads. Because they all drowned once they got their legs. Poor things.

Aaahhaaa... we tricked you!!! I am so glad that we're done with this and it will be a long time before we do any other creatures!!!!

Julie, you make me laugh :D Butterflies are beautiful!!!!!LOL

Happy Birthday to your little Love. She is precious! I'm so happy you are all feeling better now too :)

Good to visit!
Love and Hugs to You,
Kelly
xxOOOOOOO LOL :)

The sacrifices we make for our kids! Great post!

That was very cute! One of these days I will need a guest post....Just saying!

Oh Otin you know I will get around to asking you just as soon as i get a vacay!!!!