Is Common Sense all that Common?

Today we mourn the passing of a beloved old friend, Common Sense, who has been with us for many years. No one knows for sure how old he was, since his birth records were long ago lost in bureaucratic red tape. He will be remembered as having cultivated such valuable lessons as:

Knowing when to come in out of the rain; why the early bird gets the worm; Life isn’t always fair; and maybe it was my fault.

Common Sense lived by simple, sound financial policies (don’t spend more than you can earn) and reliable strategies (adults, not children, are in charge).

His health began to deteriorate rapidly when well-intentioned but overbearing regulations were set in place. Reports of a 6-year-old boy charged with sexual harassment for kissing a classmate; teens suspended from school for using mouthwash after lunch; and a teacher fired for reprimanding an unruly student, only worsened his condition.

Common Sense lost ground when parents attacked teachers for doing the job that they themselves had failed to do in disciplining their unruly children.

It declined even further when schools were required to get parental consent to administer sun lotion or an Aspirin to a student; but could not inform parents when a student became pregnant and wanted to have an abortion.

Common Sense lost the will to live as the churches became businesses; and criminals received better treatment than their victims. Common Sense took a beating when you couldn’t defend yourself from a burglar in your own home and the burglar could sue you for assault.

Common Sense finally gave up the will to live, after a woman failed to realize that a steaming cup of coffee was hot. She spilled a little in her lap, and was promptly awarded a huge settlement.

Common Sense was preceded in death, by his parents, Truth and Trust , his wife, Discretion,his daughter, Responsibility, his son, Reason.

He is survived by his 4 stepbrothers; I Know My Rights,

I Want It Now, Someone Else Is To Blame, I’m A Victim.

Not many attended his funeral because so few realized he was gone. If you still remember him, pass this on. If not, join the majority and do nothing.

Originally posted by: Posted by Ed Conti on Sept. 8 '08 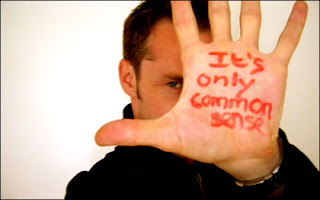 I always said I didn't have as much book smarts as common sense. I believe it still holds true. But, how does one get common sense?

Believe it or not, it is learned that's how. However this knowledge can not come out of a book. It is learned in hardware stores, the back of house in restaurants, combing through grocery store aisles and just paying attention in general, to the world around you.

I believe common sense is not so common anymore because kids and their parents know the importance of book smarts but have forgotten the lessons passed on from generation to generation. Things like don't put a ladder up near electrical wires on your garage and turn the power off from the garbage disposal before sticking your hand in to fish out that ring seem like something everyone would know....but, do they? The lack of thinking about things in general is an epidemic. 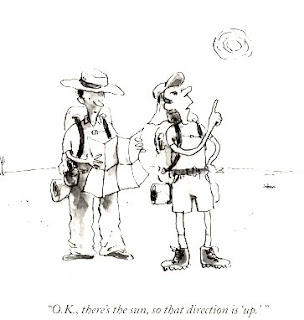 I was discussing this with a friend. Her take was this: Everything is done for people these days. Nobody has to think anymore. We are told what to think about, where to go, how to get there, and when. With things like spell check, on board GPS systems, calculators, and parents who do everything for kids there is no reason to think. She feels that we have become walking zombies. Plus, the point that I thought was most pertinent: there are no consequences. So, if you do something really stupid and don't face a consequence you don't learn. The final point she made which strikes true is - we are told that everyone needs to "feel good about themselves" alllllll the time. Everyone needs to make the team and even if you can't hit a ball everyone pats you on the back and says, "good try" instead of saying - maybe baseball isn't your thing! That is not realistic...

What do you think about the uncommoness of common sense? Leave your opinion as a comment for me - I would love to know! 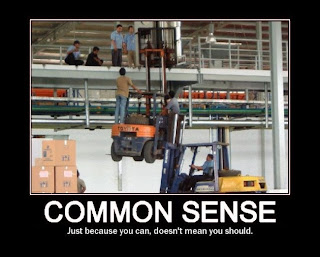 I work in retail. Common Sense was gone long ago. Everyone always wants something for discounted or free.

I get aggravated when someone gives me a phone that was clearly dropped in water, and say, it just started doing this overnight. Right.

I classify anyone with the lack of Common Sense as stupid.

I couldn't agree more with your friends comments. There are no consequences for wrong doing. To me, a large portion of this stems from the lack of respect and today's society thinking "I deserve this". What ever happened to "I earned this"?

I remember growing up and if I stepped out of line, I knew I would pay the wrath of either my mother or father. You learned early on what was right and wrong and hence, developed a true knowledge of common sense. Great post!! I was one of the mourners at that funeral!

I agree, too many parents think they help their children by absorbing the consequenses rather than teaching and counseling them in the first place. Too many teachers postpone a test when kids whine that they didn't have time to study. And too many polititions promise to step in and take care of peoples problems with the money of those who used common sense from the beginning.

I can't comment on the death of common sense because I work in the common sense terminally ill ward at the local high school. There are quite a few students that don't even know what the words mean and that is either because their parents don't either, or the lack of brain development mixed with hormones is covering it up.

However, I also have to say there are a fair number of parents and students out there that have a lot of common sense. No really! We don't seem to see it because they usually aren't the ones making a spectacle of themselves or aren't the ones trying to get a new phone by lying about it. They are the ones you can call on for doing something inappropriate and apologize for it (and you know they mean it.) Those parents are the ones you can let know their kid is being a jerk and the kid is grounded for 2 months (just had that happen).

Try to keep looking at the bright side and you will see there is still common sense out there but just hidden behind the ignorance of others. It might not be the standard anymore but it's still here.